Has anybody made a creepypasta tulpa? 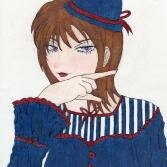