A Shooting Star from Shangri-La 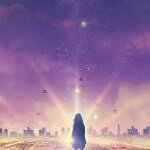