An angry but actually kind dragon that doesn't use beautiful words 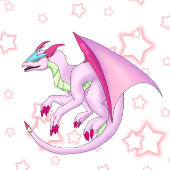