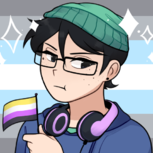 Tulpas seem inactive and disinterested??? I'm trying to start a conversation with Casey but she keeps ignoring me

By HarperTheCentaur, June 23 in Questions and Answers