Xenon - with Shalkagi, Q, and Lanna 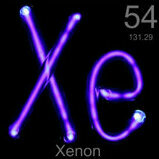