Reason for Creating a Tulpa 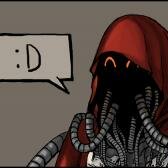 By FedoraFreak,
May 21, 2012 in General Discussion