[visualization] (BAD THREAD) Simply imagine what a vivid, detailed visualization would look like. 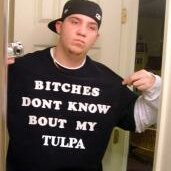