Concerned about my Tulpa! 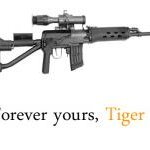