Changing her name or just repeating what I’m saying? 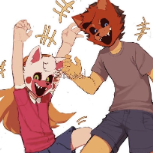