[misc] Are We an Advanced Median System or Something Else? 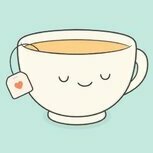