Explorations of the world within, documented by Candlelight 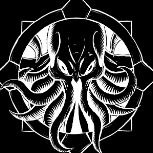