How do I stop worrying about parroting and puppeting? 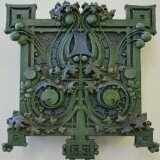