[switching] A Few Questions on Switching 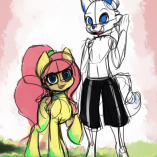